The mountain resort Bakuriani is situated on the northern slope of the Trialeti Range, 29 kilometers from Borjomi, at an elevation of 1,700 meters (5576 feet) above sea level in the sub-tropical zone. The snow blanket remains for 4-5 months, but the aroma of the coniferous trees and other climatic factors create ideal conditions for rest and recreation in the summer. It is a paradise for ski lovers and an internationally important winter sports center, which meets Olympic standards. 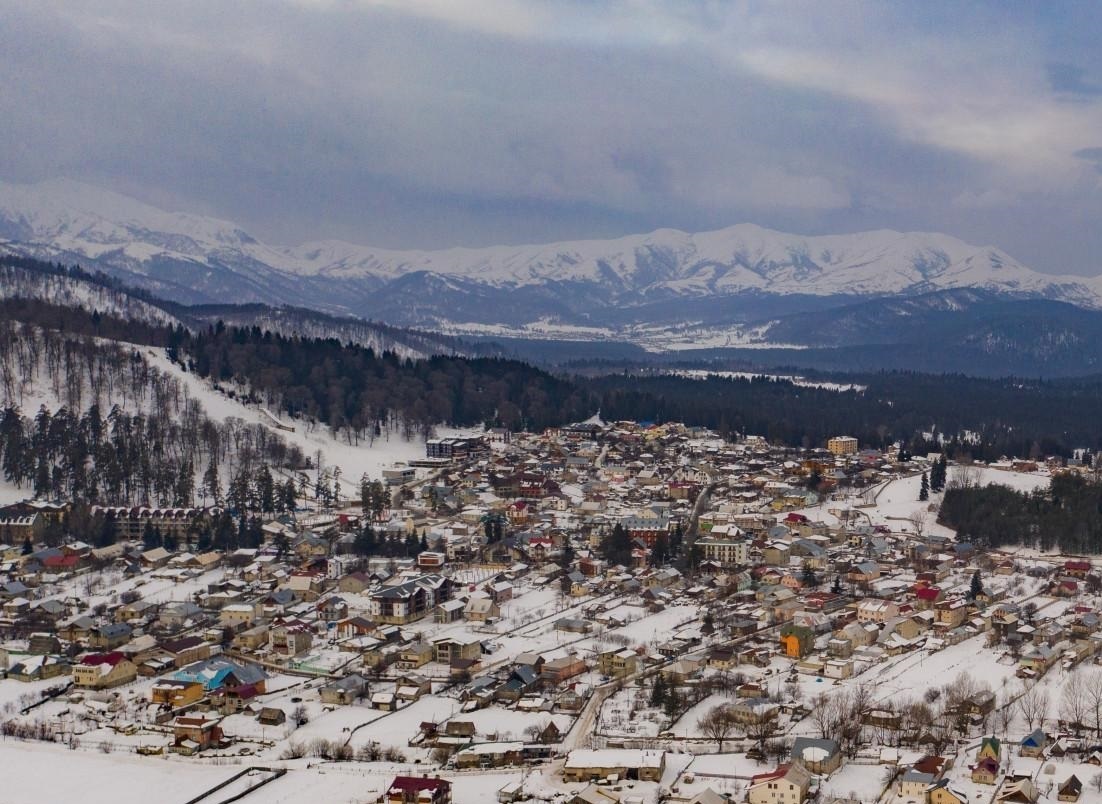 The climate of Bakuriani is transitional from humid maritime to relatively humid continental. The winters are cold and experience significant snowfall while the summers are short. The average annual temperature of the town is 4.3 degrees Celsius. 7.2 ° C in January and 15 ° C in August. The average thickness of snow cover is 64 cm.

The first residents of Bakuriani were Ukrainians. In the XVIII century, the Ukrainians were resettled in this town. Later Georgians were also settled there. 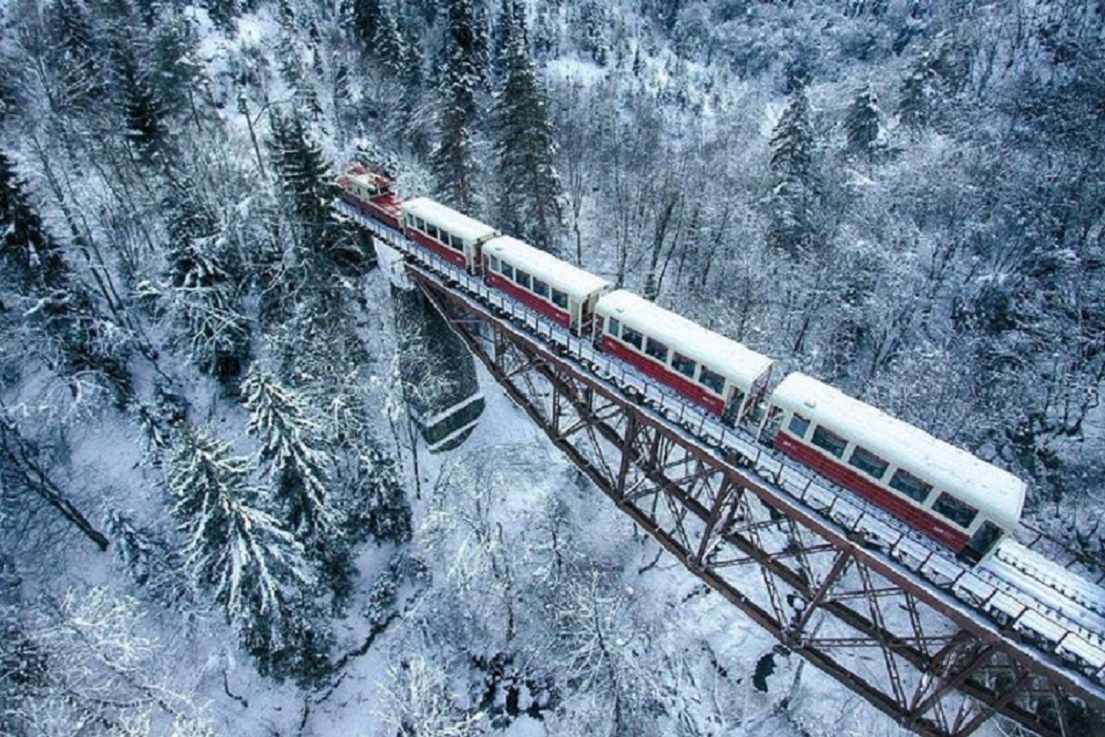 Many tourists and locals have traveled by famous “Kukushka” train that passes through amazing forest and ascends great mountains of Georgia. If you get a chance to visit Tsagveri, Borjomi or Bakuriani resorts of Georgia don’t forget to take the famous train trip as well.

Borjomi’s famous Kukushka train obtains intangible cultural heritage status. The bridge which connects Tsagveri (a small city in Borjomi Municipality, south-central Georgia) to Tsemi village through a Borjomi-Bakuriani railway line was designed by the French engineer Alexandre Gustave Eiffel by the order of the Romanovs, the Russian royal family. The construction was brought to Georgia in pieces and installed on the river Tsemistskali in 1902. The first “Kukushka” (the Russian nickname for a steam engine) train has completed the Borjomi-Bakuriani route in January 1902. Since the railway line went through highly mountainous areas, a Porter-type steam engine was brought from England.
Later, open carriages were added to the train, framed only by handrails. Since 1967, the small steam engine was replaced by an electric engine. The popular “Kukushka” still functions, a favorite of tourists and locals alike.

In 70-80-s of the XX century Bakuriani was one of the bases for the training of ski mountaineering Olympic national team of the Soviet Union, where many famous Soviet skiers were training, it also various slalom, bobsleigh, biathlon and ski flying sporting events was held.

The resort's infrastructure was established in Soviet times ago when Bakuriani used to be a Winter Olympics training base. Since then thousands of people keep coming to Bakuriani to ski, sled, explore the nearby hills and slopes, practice cross-country skiing or just to relax and breathe fresh mountainous air. The infrastructure has been renovated turning Bakuriani into one of the most popular Georgia ski resorts. 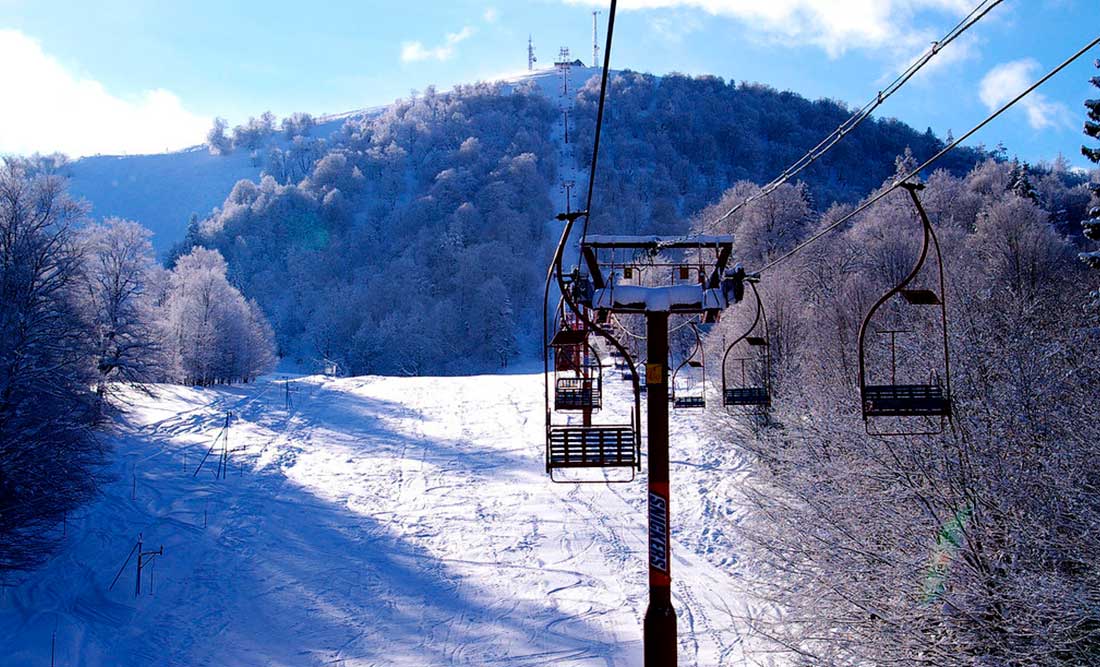 Currently, Bakuriani offers 23 ski pistes with a total length of 29.1 kilometers. The tracks are equipped with artificial snow-making systems and targeted for all skiers. Slopes here are divided according to the following levels of difficulty - beginners, intermediate, advanced, expert. 8 lifts and 1 funicular are opened from 10 am to 5 pm and serve visitors.

Many international athletes come here to practice their skills. It is also a superb venue for children to take their first steps in winter sports; ideal for families and popular among the young generations. Ropeways, ski-jumps, ski tracks, cross-country skiing, night skiing, horse-rides, horse-drawn sleds and snowmobiles - all can be found in Bakuriani. The surrounding mountains offer numerous possibilities for both challenging and scenic mountain mobile trips.

There are several main trails in Bakuriani, one of which is Kokhta (2,255 m high) is a 4 km ski run with difficult and medium difficulty slopes. This is the oldest ski area in Bakuriani.

Dive (1861 m) has one of the most amazing trails. From here you can catch a gondola to the slopes of Mt. Sakvelo, and ski a range of blue and red routes. The longest piste is around 4 km long. Advanced skiers can continue further up the mountain by catching a chairlift at the top of the gondola to almost the very top of Mt. Sakvelo itself. Here, you can enjoy stretching your ski legs on very steep and difficult red and black runs.


The largest ski resort in Georgia, Gudauri, is located at an altitude of more than 2000 meters. It is considered the highest mountain resort in this region. Gudauri began to develop in the 70s of the last century. The resort continues to grow to this day, in each season they open new tracks and modify lifts. You can enjoy with well-developed infrastructure, the greatest difference in altitude, and unlimited possibilities for freeride, backcountry (ski touring). 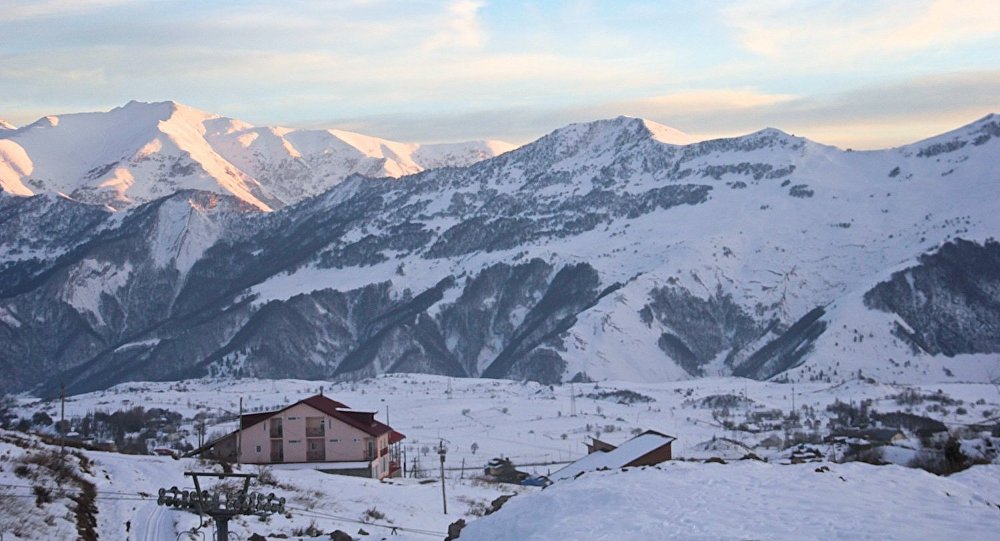 Gudauri is located north of Tbilisi near the famous highway - the Georgian Military Road. Many famous writers traveled along this path at one time, it is also the main trade artery connecting Georgia and Russia. The resort has routes of different difficulty levels, but it is better known for beautiful virgin fields and slopes for free rides and backcountry. 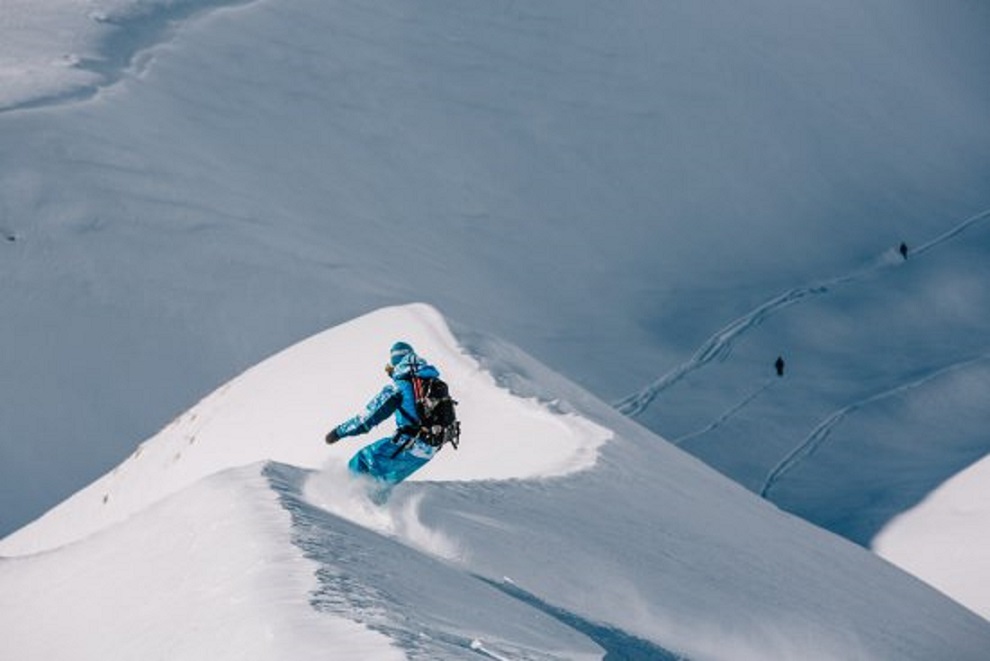 The main skating zone is the southern slopes of the Sazele and Kudebi peaks. The highest point of the resort - 3279 meters 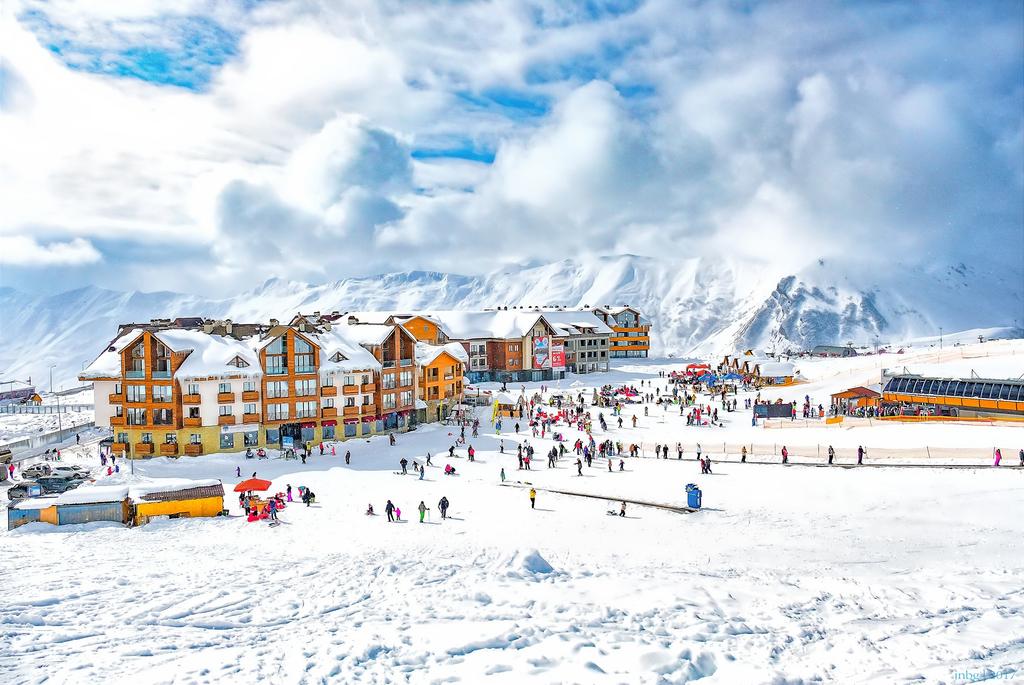 Gudauri is famous for warm and snowy winters. The main skating zone is located on the southern slopes, and therefore warm and almost windless weather remains here throughout the season. Bright winter sun can create hardcover on the tracks (when melting snow freezes at night). Avalanches are rare. Snow cover is quite stable and its height is on average about 1.5-1.7 meters. In winter, daytime temperatures rarely fall below -7S. The upper stage of lifts in the event of wind or heavy snowfall can be closed. 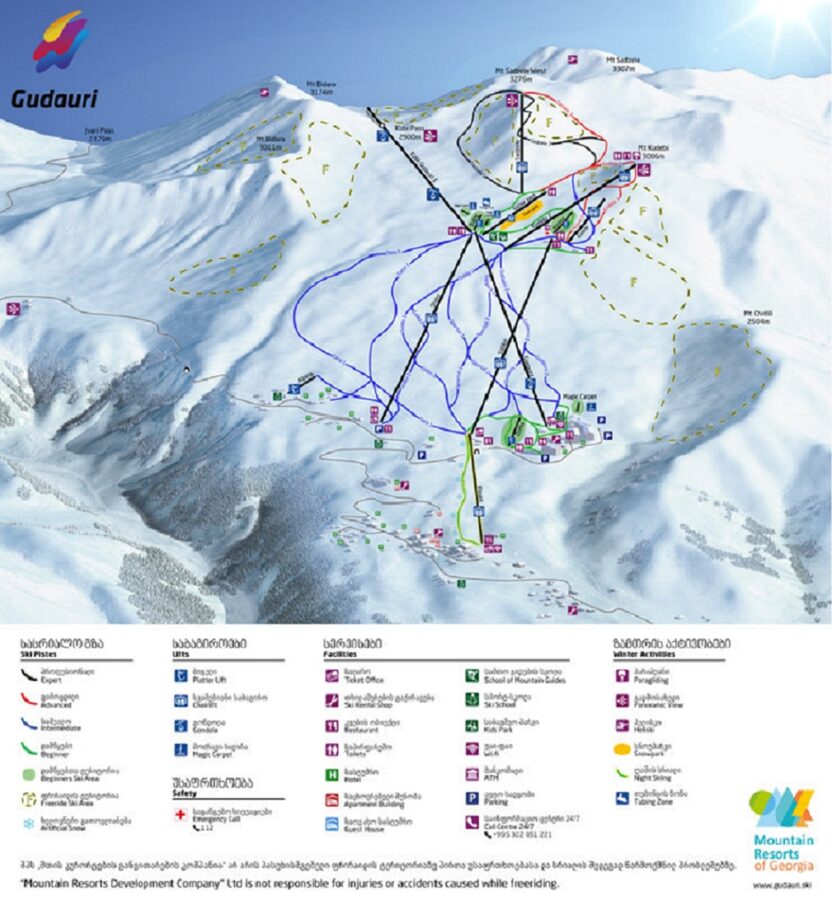 In Gudauri, quite a lot of routes of different levels of difficulty have been laid. Basically, these are red and blue tracks, which are suitable for both experienced skiers and those who are just mastering this sport. Most tracks have quite standard relief, where steep sections alternate with gentle rollouts. However, they mainly go to Gudauri to ride on virgin lands. The feature of the relief - the absence of hidden stones and ridge, creates ideal conditions for freeriding. To master untouched snow cover, you can use the services of a helicopter or climb to the right point yourself. There are several schools that offer guides and instructors for freeriding.

Pirveli: a green track that leads to New Gudauri. Illuminated at night on Fridays, Saturdays and Sundays 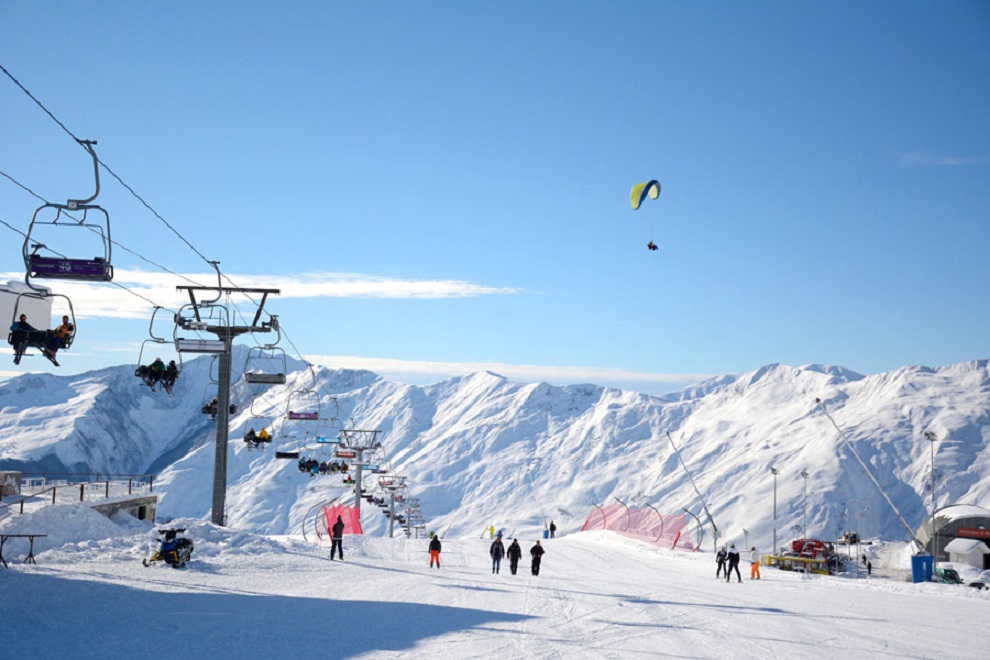 Gudauri has something to offer to those who are not delighted with the conquest of the slopes. Several cross-country skiing tracks have been laid at the resort. Fluffy snow and spectacular views will make this walk truly unforgettable. Several schools have been opened in Gudauri, where they offer paragliding services. There is a track for skating on cheats. 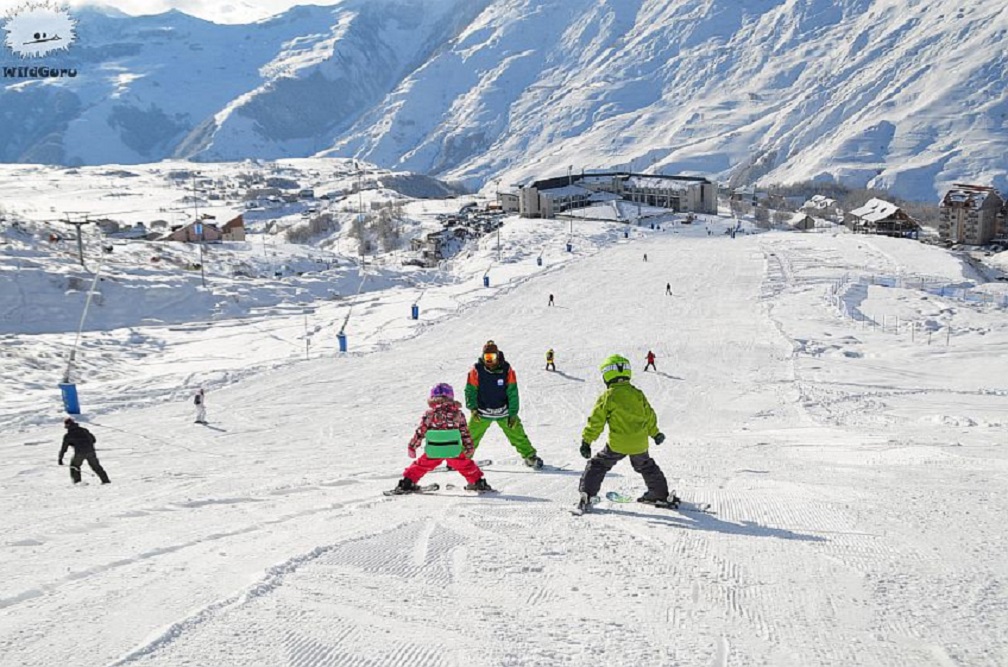 In Gudauri there is a private kindergarten where young travelers can be left while parents ride. At the lower station of the lift are playgrounds. Several ski schools for children have been opened, where students from the age of 3 are accepted. Lifts for children under 6 years of age work free of charge. Older guys can try their hand at driving snowmobiles. The resort has hotels equipped with children's rooms and offers babysitting services. 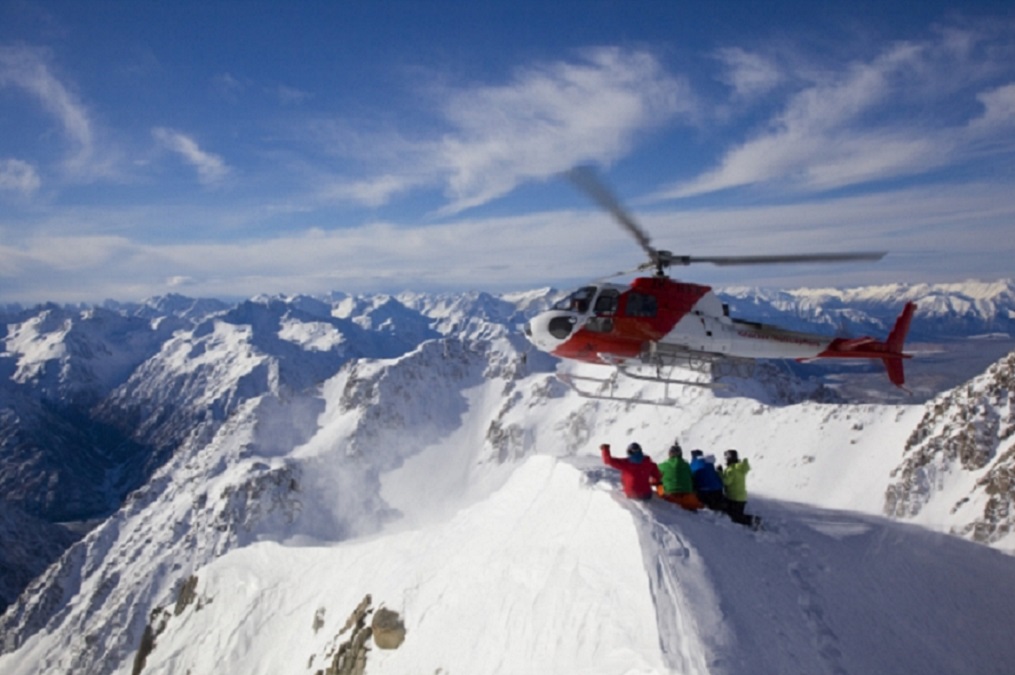 Helicopter skiing or heli-skiing is a type of backcountry skiing/free-riding which involves a helicopter to access remote areas and slopes of virgin powder snow. Chances are that you already know what heli-skiing is about, but for those who have never heard of it before, here is some information about this type of adventurous skiing: First of all, heli-skiing is an activity of downhill skiing/snowboarding which takes place in untouched snow, on remote mountainsides, away from the groomed slopes of a ski resort. What separates heli-skiing from other types of freeriding and backcountry skiing is that skiers and snowboarders are flown by helicopter to the top of these remote slopes. Using a helicopter allows the skier or snowboarder to quickly reach stunning heights and spectacular slopes otherwise difficult to access.

Heli-skiing in Gudauri is a truly unique experience: it combines the magical sensation of getting a bird’s-eye view of the mountain world, and the thrill of gliding through powder snow, down pristine slopes may-be never skied before. This is why heli-skiing has become a popular thrill-seeking adventure, attracting more skiers and snowboarders every year, from first-timers to expert free-riders. 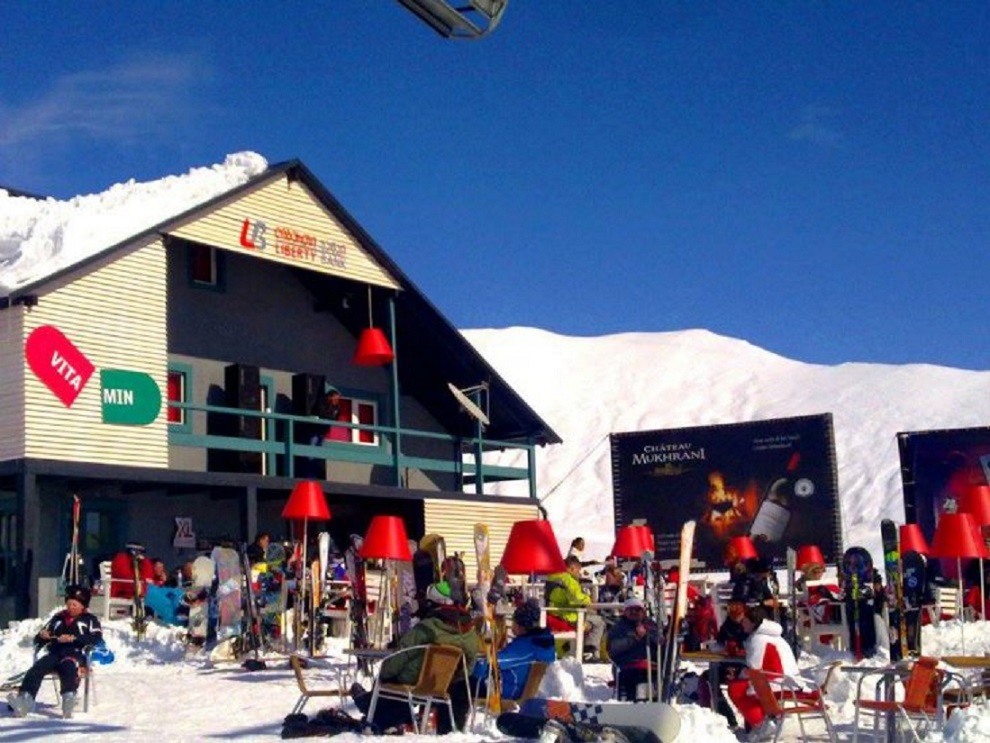 The resort has nightclubs, bars and restaurants. There are not a lot of them, but you can choose the right place for dinner. Some hotels offer accommodation with breakfast and dinner, for those who do not want to suffer from the search for a place for an evening meal. After a busy day, you can go to a Russian bath or SPA center. However, Gudauri's nightlife is not very rich in events..

Replace this text with some additional info. If there is no extra info, you can hide this text or hide this block by clicking the icon at the above right corner.